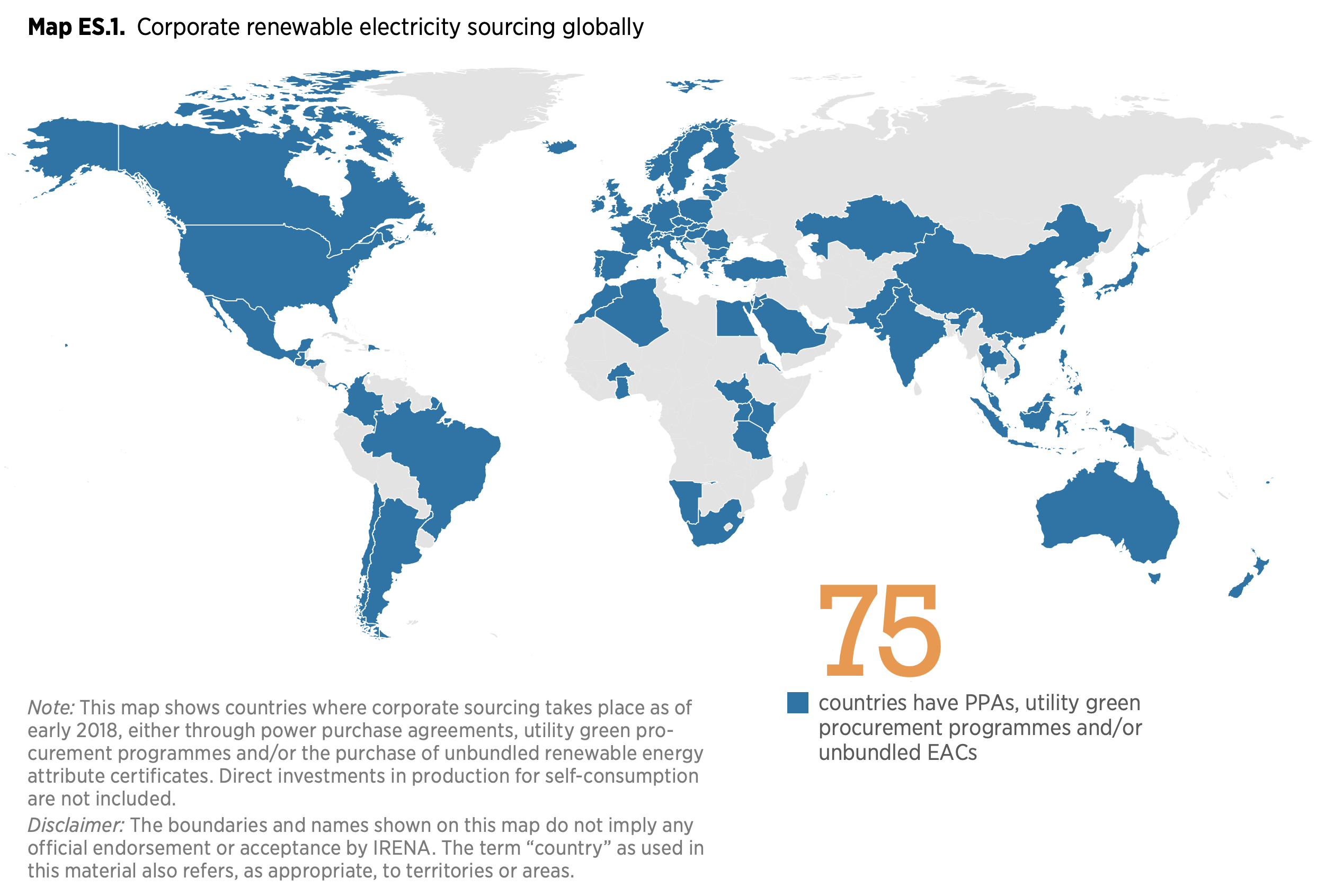 Companies in the commercial and industrial sector account for around two-thirds of the world’s demand for electricity. Switching this to renewables can have a transformative impact on the global energy market and will accelerate the global energy transformation that we need to move away from fossil fuel and reduce greenhouse gas emissions. Initiatives such as RE100 are a driving force behind this movement and help raise the bar for corporate leadership on renewable electricity; more than 300 companies have set a public goal to source 100% of their global electricity consumption from renewable sources.

Corporate demand for clean electricity is – more than ever – at the centre of global attention. But what exactly can be done to help corporates meet their ambitious commitments and ensure their contribution to our global climate targets? A recent briefing paper makes the case for clean-energy corporate power purchase agreements (CPPAs) to partly answer that question.

A key response to corporate commitments

Clean-energy CPPAs are long-term contracts under which a business agrees to procure renewable electricity directly from an energy provider. They provide procurers with certainty over the wholesale price of energy for a pre-agreed period, while generating an attractive and predictable revenue stream for the power producer. Renewable energy CPPAs typically accelerate the deployment of clean-energy projects by facilitating access to project finance. They also enable developers to build new renewable infrastructure without relying on government-led auctions. As such, renewable energy CPPAs are increasingly profiling as a major response to the increasing number of corporations targeting 100% renewable energy procurement.

A record 23.7GW of clean energy was purchased by corporations via CPPAs in 2020 – a sixfold increase since 2016.

Corporate sourcing of renewables is already taking place in different shapes in more than 75 countries, but the truth is, most governments are yet to adopt specific policies to encourage demand and fully enable CPPAs. In fact, while the trend for increased clean-energy demand is global, most companies reporting active sourcing are still head-quartered in Europe and North America. As it stands, most emerging and developing markets have not enabled direct power purchase contracting yet.

The increased number of corporations looking to procure clean energy means that countries with favourable CPPA regimes will become more and more attractive for businesses and investors. In fact, it is thought that any lack of ability to procure renewable power will gradually have an adverse influence on direct foreign investment for countries.

Nations nurturing a CPPA market will also ensure they safeguard supply chains installed in their territory. Undeniably, suppliers will increasingly leave themselves exposed to the risk that their customers will seek alternative vendors, located in jurisdictions that are capable of implementing these types of renewable power contracting.

… if barriers are lifted

As it stands, however, a vast majority of countries, particularly in the emerging and developing world, would need to significantly adjust policies to stimulate a rapid scale-up of corporate sourcing and renewable CPPAs.

Heavily regulated power markets with limited private sector participation remain a key roadblock. In these circumstances, system operation, power distribution and pricing are sometimes state-controlled, all of which serve to prevent the acceleration of a localized CPPA market. In particular, the requirement that all renewable power generated must be sold to a single buyer (typically a state-owned entity) represents a very serious challenge in many jurisdictions.

Regulatory positions preventing the wheeling of power through open grid access and limitations in the ability to do onsite generation are also major barriers to clean energy corporate sourcing.

Similarly, clear, stable regulation around the ability to do virtual CPPAs, as well as having a credible and transparent system for issuing, tracking and certifying renewable energy certificates, would alleviate some of the key barriers currently preventing corporates to invest in renewable energy.

Renewable CPPAs need to be recognized and clearly facilitated by local regulators if we are to collectively reap the wider environmental, social and economic benefits that can arise from their implementation. With an increased number of corporations pledging to 100% renewable energy sourcing, countries acting fast can position themselves as a go-to destination for the clean energy investments they so desperately need to reach their own decarbonization targets.